Doing nothing useful this Saturday? Up for a bit of culture? Come say hi at Kulturhuset in Stockholm! I’ll be participating in Stockholms Litteraturmässa, a huge event with lots of books, books and then some more books. It’s all FREE ENTRY and you can go in between 11am-5pm all Saturday.

Hope to see you there!

HUGE REVELATION: it all began with super villain Topster. That’s right, the whole shebang that is The Landskapë Saga started with the blonde, arrogant, big-headed Master in blue.

Read more below the image.

Topster did something as bold as come into my head fully formed with all his strengths, his flaws and his weaknesses. Now, I can’t be sure of the exact percentage, but for some reason he looked an awful lot like T.O.P from my favourite Korean pop band Big Bang. His eyes carried the same intensity and bottomless depth, his body language was as exact and self-conscious. Even the cool, silky smooth aura which I admired so in this rapping k-pop star carried through to what was to become a key character to the entire plot of The Landskapë Saga.

I imagine they speak the same way: in a low voice, without the need to shout for attention. A round, dark and rich voice with small movements in the mouth. Unless he speaks from anger. When wrath wraps itself around his words he grows taller, he widens, and his entire being becomes monstrous, but only in our perception of it. Then he pulls back, back to his composed and poised self. A low voice, demanding to be listened to without asking for attention. It gets it anyway.

It began with Topster, with him and Sofia, and it remains to be seen whether that’s where we also find the end to the saga. Rest assure, however, wherever you are in the story, that you have not yet seen the last of my dear, dear Topster.

Allow me to introduce Patsy, my absolutely fabulous partner in crime and new writing buddy. Book three is going to be off the charts with the help of this fluffster ❤

Please may I introduce my new roomie and partner in crime, Patsy ❤️ On Instagram: @patsyfied 😻

This post is part of a series of blog posts I’m calling What’s in a Name? which aspires to enlighten not the famous question itself, whether a rose would by any other name smell as sweet (I’ll leave that up to those with special semantics skills), but to shed light upon the characters of The Landskapë Saga and, thus, illuminate the stories, the energy and, in some cases, the conflict behind their named existence.

NB! These posts include some spoilers.

Otto Evenson, the father of our heroine Freja, is more of a fickle creature than meets the eye at first glance. Don’t let his handsome exterior and kind eyes fool you. Instead, let your eye linger a moment longer, let it not stray when most eyes would, and you’ll find that Otto is just waiting for the hot steam from his freshly baked goods to distract his observer before he reveals his true colours …

The Good and Evil Angels by William Blake

“Otto” is of course a palindrome, a word that reads the exact same way backwards as forwards – and in this exact fact we find some important clues to Otto’s character. Towards the end of Bell Eleven we find out that he is not who he seems to be. Don’t worry, I won’t spoil with exact details.

The point is that the palindrome he bears reflects his existence. As “Otto” reverses identically on its own axis, Otto Evenson is one character with two directions. Neither aspect of his character is absolute, both strings of his being equal in building his character from two directions. From the O’s supporting the T’s forming the middle on each side, his conflicting persons battling within support and shape the character that he is.

Given the consequences of this revelation, to himself and to those around him, we may be quick in concluding that it’s a flaw in his character, but is this really true? Isn’t it a strength to have the two parts of him, provided that he can reconcile them? Does it not bless him with a unique point of view, particularly important in the times of turmoil we see in The Landskapë Saga?

Whether Otto is good or evil, or both, or neither, I leave up to you to decide for yourselves. Rest assure though that like the good angel in Blake’s painting, Otto will always protect his daughter no matter the price. But like the evil angel he is forever chained to his unchangeable nature and it is a burden he must carry, whatever consequences may rust those chains.

This weekend I’m hanging out at Comic Con Nordics in Stockholm, Sweden, and the first two days have been a blast! It’s so much fun meeting readers, old as well as new, and talking about fantasy, about Freja and other fun things.

If you’re around, do come see me at D:19. I don’t have an awful lot of books left so speed is of the essence! I’m posting on Instagram all weekend so follow me there at @ninajlux and keep an eye out for Stories. Video below from this morning.

My name on a thing (as my good friend S Usher Evans puts it)!

I’ll be one of the main acts at Picnicon congress for everything SF, Fantasy and Horror in November. The event takes place November 19th in Västerås, Sweden, and if you’re there please do come say hi!

Among other things I’ll feature in a panel discussion together with my author friend Rhuddem Gwelin. And of course have a bunch of books with me.

Casually headlining SF and fantasy congress #Picnicon in Västerås Nov 19th together with my good friend Rhuddem 😎 See ya there? 👀

This is the first in a series of blog posts I’m calling What’s in a Name? which aspires to enlighten not the famous question itself, whether a rose would by any other name smell as sweet (I’ll leave that up to those with special semantics skills), but to shed light upon the characters of The Landskapë Saga and, thus, illuminate the stories, the energy and, in some cases, the conflict behind their named existence.

NB! These posts include some spoilers.

Freja Evenson is the main character of The Landskapë Saga (TLS). She is 18 years old as the series begins, not at all fearless (heights don’t sit well with her for example), and with a big heart full of love for her near and empathy for those in need. 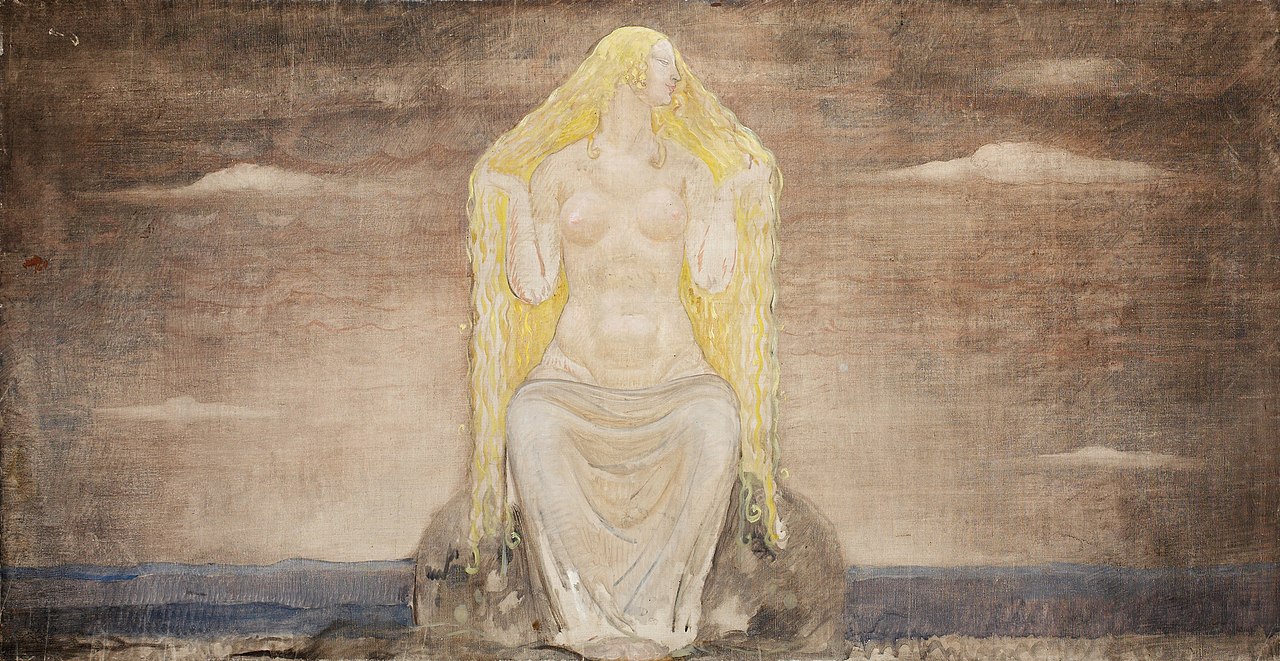 Her name stems from the Norse goddess Freyja who’s usually associated with love, sex, fertility, beauty, gold, death and war. She is the overseer of the afterlife where she receives half of those who die in battle (the half that doesn’t go to Odin), and weeps red tears for her absent husband whom she seeks under various pseudonyms.

As the child conceived from the result of the forbidden love (or bias) between a Master of the Élan and of the Trew, my Freja’s very existence makes her a symbol for the things her namesake represents. She is a vessel for the struggle between emotion and rationalism that rules Masters. She is also at once a symbol for the openness she and her friends go to war defending, as well as the manifestation of the nightmare scenario the other side is battling to keep at bay.

The goddess generously sharing her name with Freja is also known for carrying a necklace and keeping a boar by her side, but that’s where the material similarities end between them. My Freja definitely shares some foundation with the Norse goddess, some innate power runs through both their bodies, but she is a woman of her own being. Her personality finds its tangent more in the literary history of her fellow sisters than anywhere else. She has the loyalty of Katniss, the empathy of Lyra, the courage of  a Gryffindor and a similar disregard for society’s expectations as many female protagonists that have gone before her.

But she is also a human being (or has been raised as one at least) and this superpower sets her aside from the other Masters. Her social skills, her empathy, her rich emotional inner life and her ability to feel with other beings is rare in the world into which she ventures and it is the quality they assume is a weakness that is her special strength and that makes her different.

If Freyja looked desperately for her absent husband, my Freja would never stop looking for an absent friend.

Yes! I’ll be attending ComicCon Stockholm in November! Come say hi to me and Freja as we navigate the marvellous world of games, comics, books and more. Maybe (probably?) in H:27, next to the Manga café and the lecture halls.

If you’re there, come say hi!

It's truuuue! 😍😍😍 I'll be at @comicconsweden 4-6 November in Stockholm with my darling Freja! Come find us, say hi, have a chat/whatever 😸 Hope to see you there 😘

Today I’m guest blogging over in fellow indie author S Usher Evans’s corner! It’s all about world building, about ways to go about it and about the importance of a source of protein (little vegan joke for y’all).

Check it out here!

The Muse by Jessie Burton

Let’s be real, Jessie Burton is a star. In all honesty, I did enjoy The Miniaturist more than The Muse, but this is no less a gem. Two stories, the 60s in London and 30s in Spain, Malaga. It’s a story of identity, of finding one’s place, of desire and obsession, of female history and male history and human history. Each plot line is filled with memorable characters with secrets of their own, these two plot lines slowly edge closer to each other until you’re so close you just have to turn the page to see what ingenious solution Burton comes up with. I think both stories contain enough to fill the pages of a book of their own, but they also work beautifully together.

I for one cannot WAIT for her next book. Jessie Burton, you are my hero, my inspiration – my muse.

View all my reviews